WE ARE CHEMICAL FREE

We use no chemical herbicides or pesticides and only organic fertilizers.

We propogate 99% of our plants right here on our farm in southwest Missouri.

Our staff consists of Barb and Don Emge, and son Matthew.  We don't intend to compete with the big box stores.

OUR PASSION IS FOR HERBS

We exist to share our love of herbs with you.

Get Social With Us 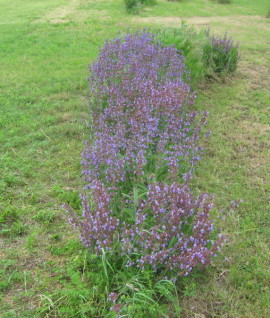 My own fascination with herbs began at my parents’ cabin, in the Missouri Ozarks, near Sullivan, Missouri. An elderly neighbor took us to his family homestead and identified many of the plants that were still growing on the property. I still remember the taste of the mint that grew wild along the creek. We took that mint with us during each move in the early years of our marriage.

Shortly after our marriage; some 35 years ago, Don tilled a small herb garden outside our kitchen door. I planted several packets of herb seeds. Some grew, some didn’t, but we’ve been hooked since then! A job change took us to Emporia, Kansas for thirteen years. With the help of our four children we grew a large selection of herbs and many of our vegetables for table use and for preserving. Each year our various gardens expanded. It was during this time that we discovered an amazing group of plants that were totally new to us, Scented Geraniums. Our son, Andrew, totally shocked his grandmother when at age three he could identify a wide variety of herbs after I had asked him to pick them for supper. Andrew has passed this early interest in growing plants onto his own little boys. In the late 1980’s I started selling extra produce and herbs at our local farmers’ market.Our next move was to Shreveport, Louisiana. We adjusted to a totally different climate. Plants like sage and tarragon struggled to stay alive during the humid summers while rosemary and bay laurel flourished and survived the mild winters. It was during this period that we greatly expanded our selection of common and unusual herbs.

Finally, in 2003 we returned to our native Missouri and settled near Springfield. We now needed a second rental truck to move all the herb plants north. Our youngest child, Timothy, had gone off to college and the first winter in our downsized home was spent dodging 80 large pots and tubs of herbs. Don said “enough!” We decided to build a greenhouse for the plants, and to save the house for ourselves.

Our only daughter, Rebecca, prefers not to remember her visit home for my 54th birthday, spending the two days chiseling out the remaining six inches of Ozark rock in the post holes of the new greenhouse and mixing an untold number of bags of quikcrete. Don asked me how we were going to pay for the greenhouse and I said “Farmers Markets”.

Barb propagates the herbs either by seed, cuttings or plant division and is always looking for new varieties to grow. Everything we sell has been grown by us in our gardens. As the business grew and we were both busy with other jobs, our son, Matthew moved back from Louiiana to help us out. Don and Matt do all the construction, heavy lifting, digging and assist at the markets and festivals. We all pot up our thousands of seedlings each spring.